I’ve been exploring the topic by studying overlaps of generated geometry and membrane structures but looking at it as a play between more the rhythmic and ordered rather than organic or natural.

I applied these studies to the configuration we worked out the last part of the semester and created a cloud-like configuration of modular tent-like structures, constructed with frame skeleton.

The path that is a spine for the camp is generated from a simple growth algorithm, that reads terrain heights and allows for the growth of points, where the endpoints are always growing towards the lowest parts of the island. This became clouds of squares and I overlaid an orthogonal thread that rambles around the main core, creating the main composition line, to place more modules along the walkway.

Minimal surfaces One of the qualities that whose figures have that grabbed my attention is the simplicity of the boundary and complexity of the surface that meanders between it. The elevation views are expressed by a simple configuration of one repeated arc. The perceptual ambiguity of overlapping shapes gives depth to the figure.

So – How do I create a base for my minimal surface? How do I do it, having a defined and regular shape?

Here came the idea of creating a defined shape from a repetitive pattern of arcs. As a base to generate the configuration I used Truchet code.

Studies above are showing, where from the pattern I extracted shape and gave it some depth by moving some modules horizontally, but the pattern is still readable from the front view and is still very simple on the side.

I was playing with the same configuration in different planes. Here I created a defined shape based on the generated pattern, by getting rid of some arcs and adding some orthogonal lines.

In this project, I was interested in a tree-like distribution and configurations on the terrain as well as in terrain analysis, which was my starting point to the design. 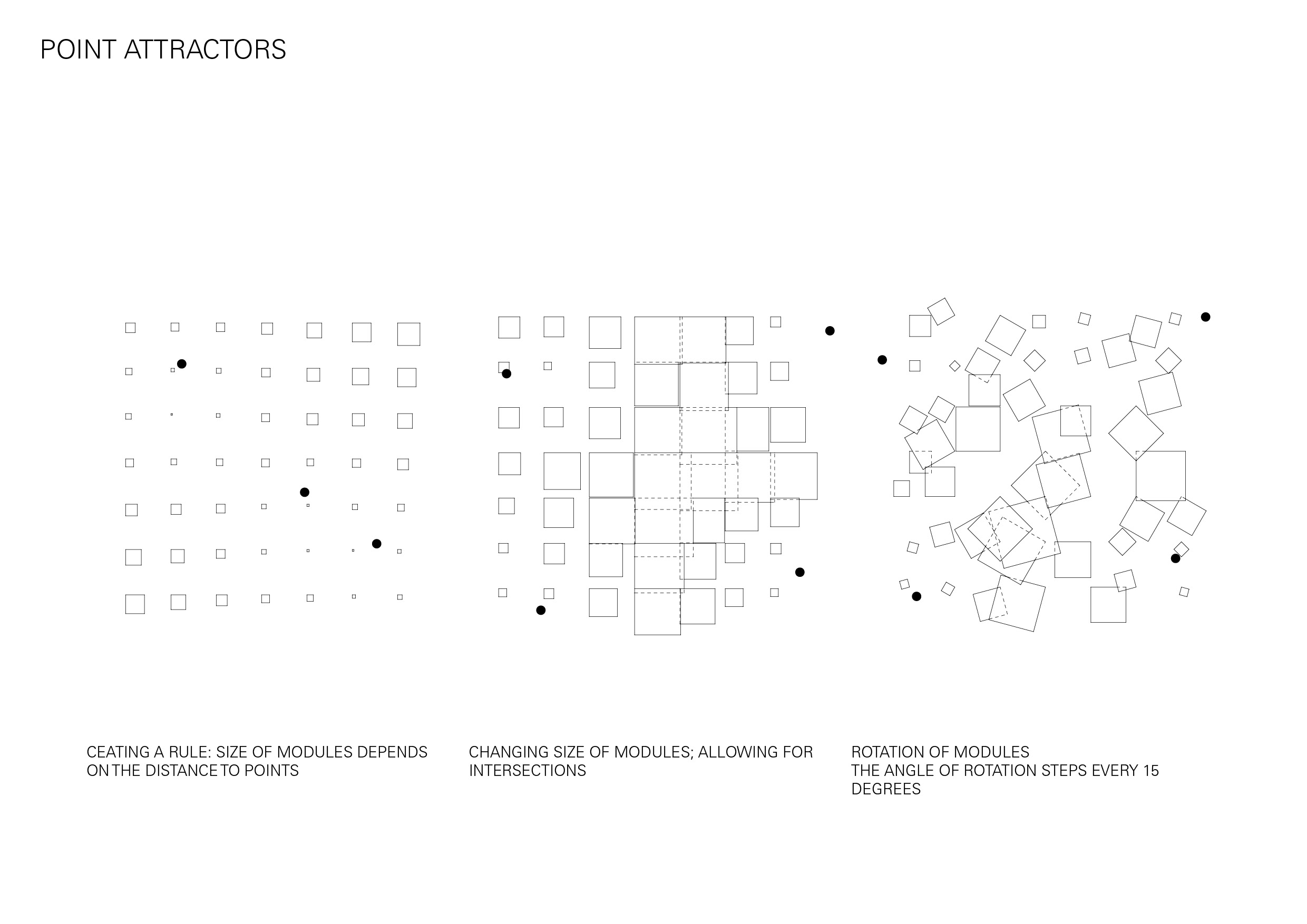 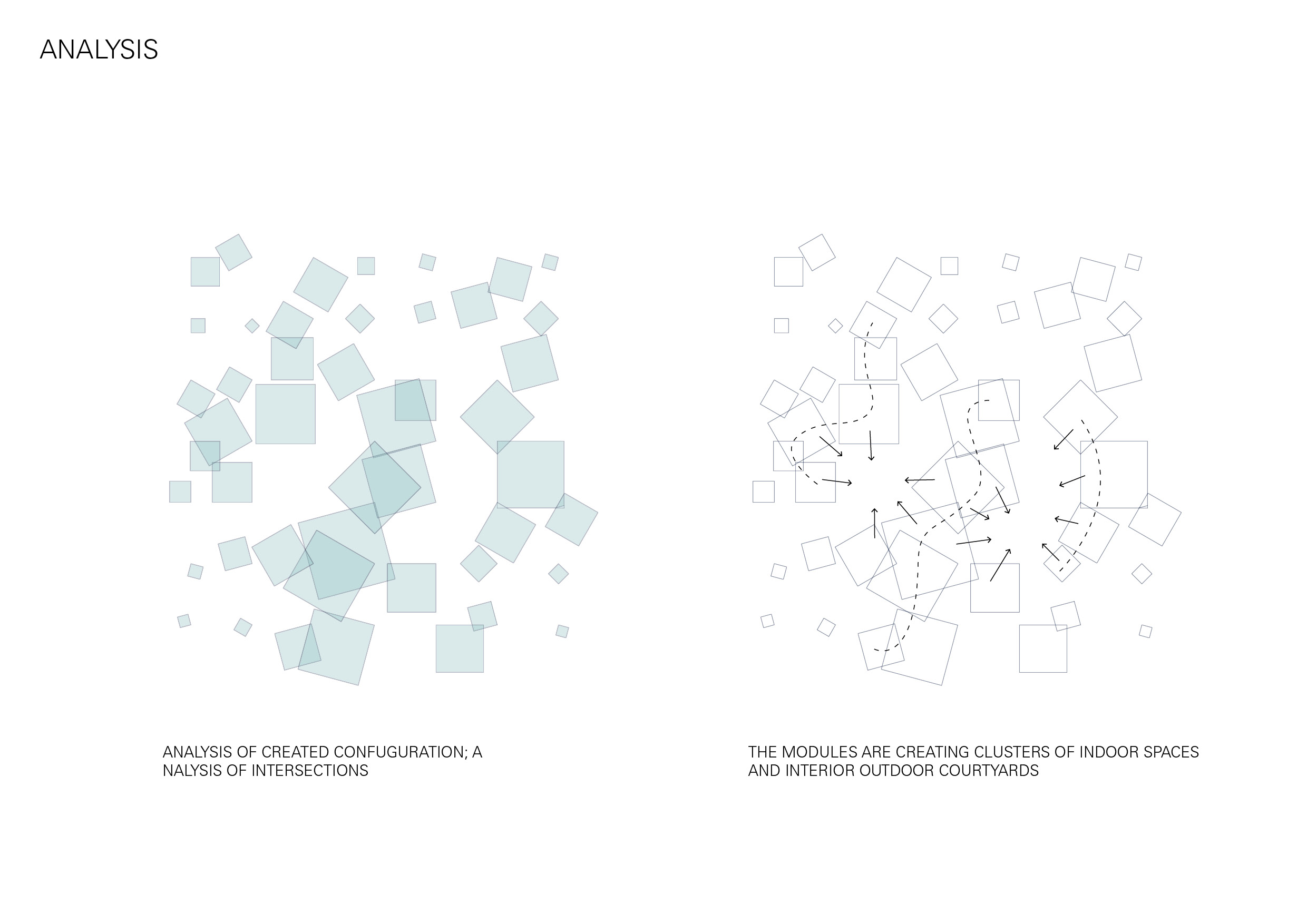 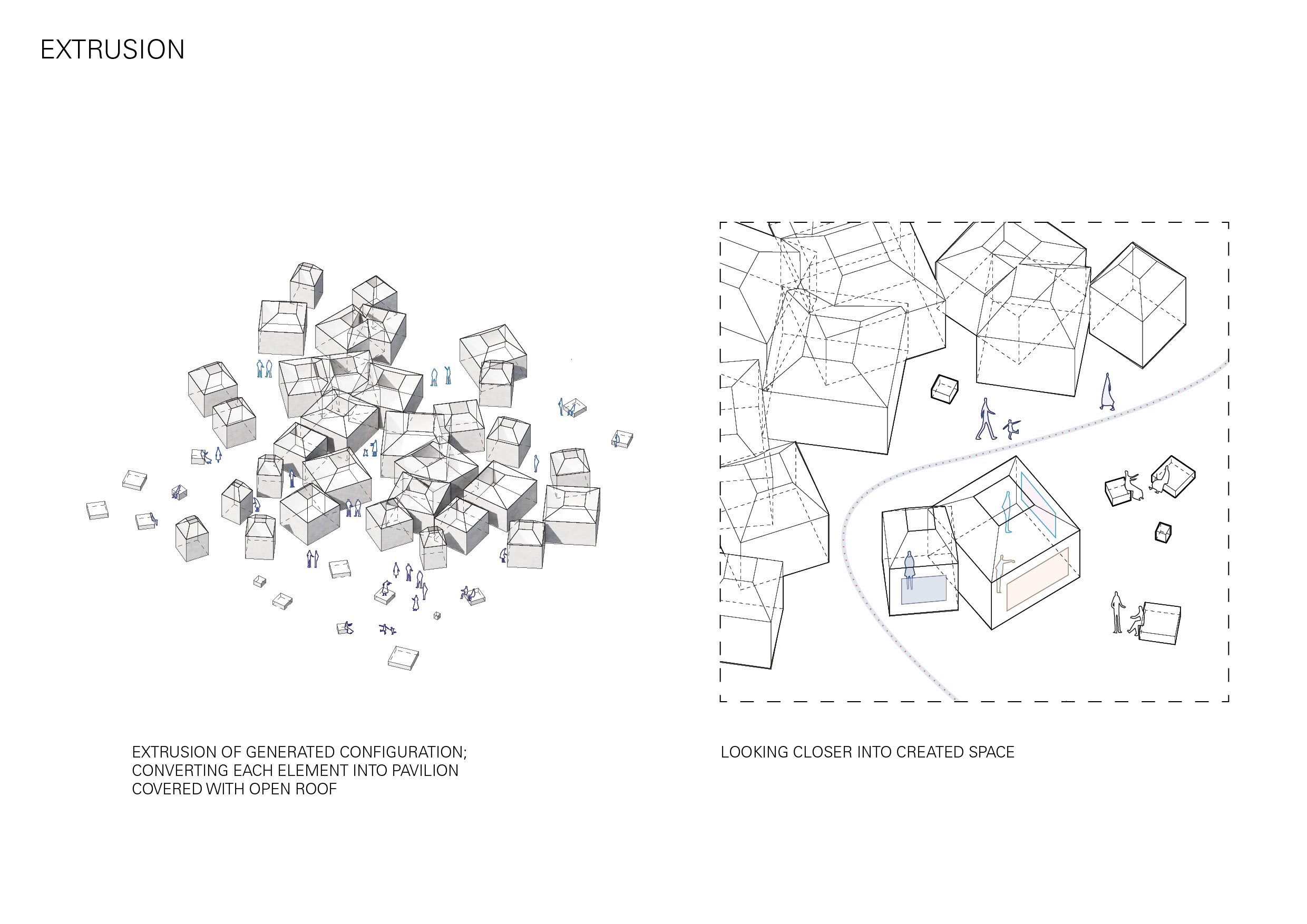 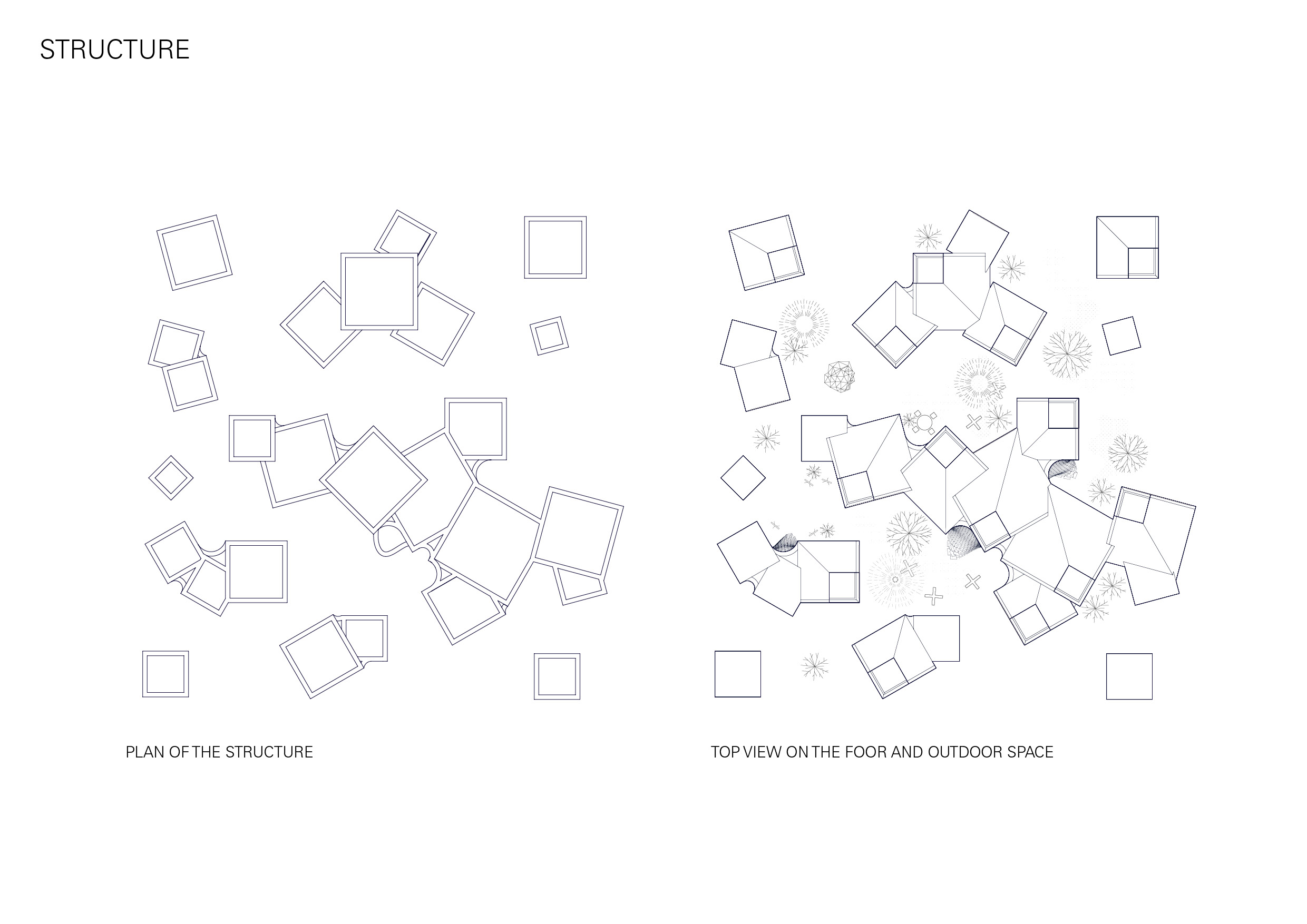 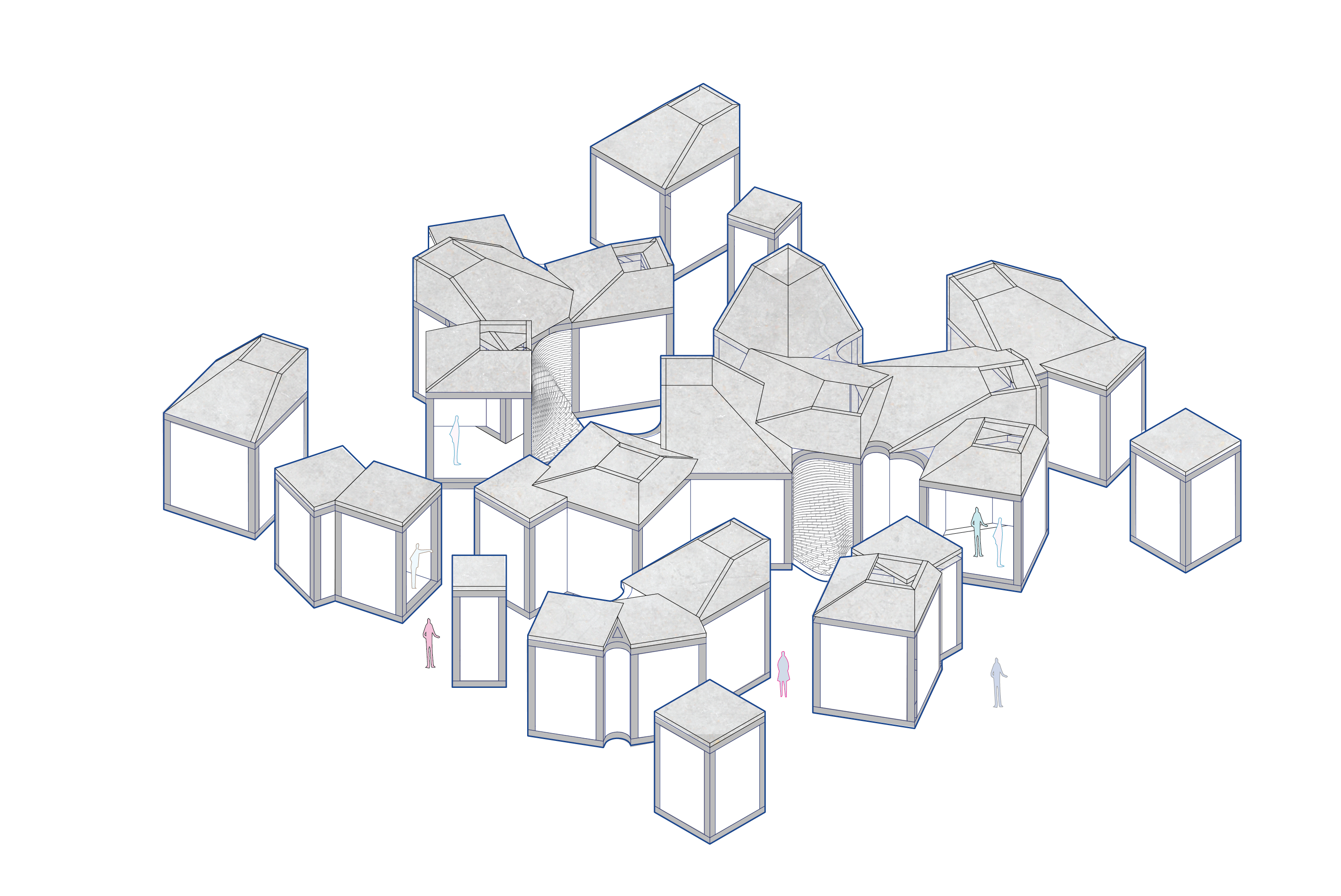 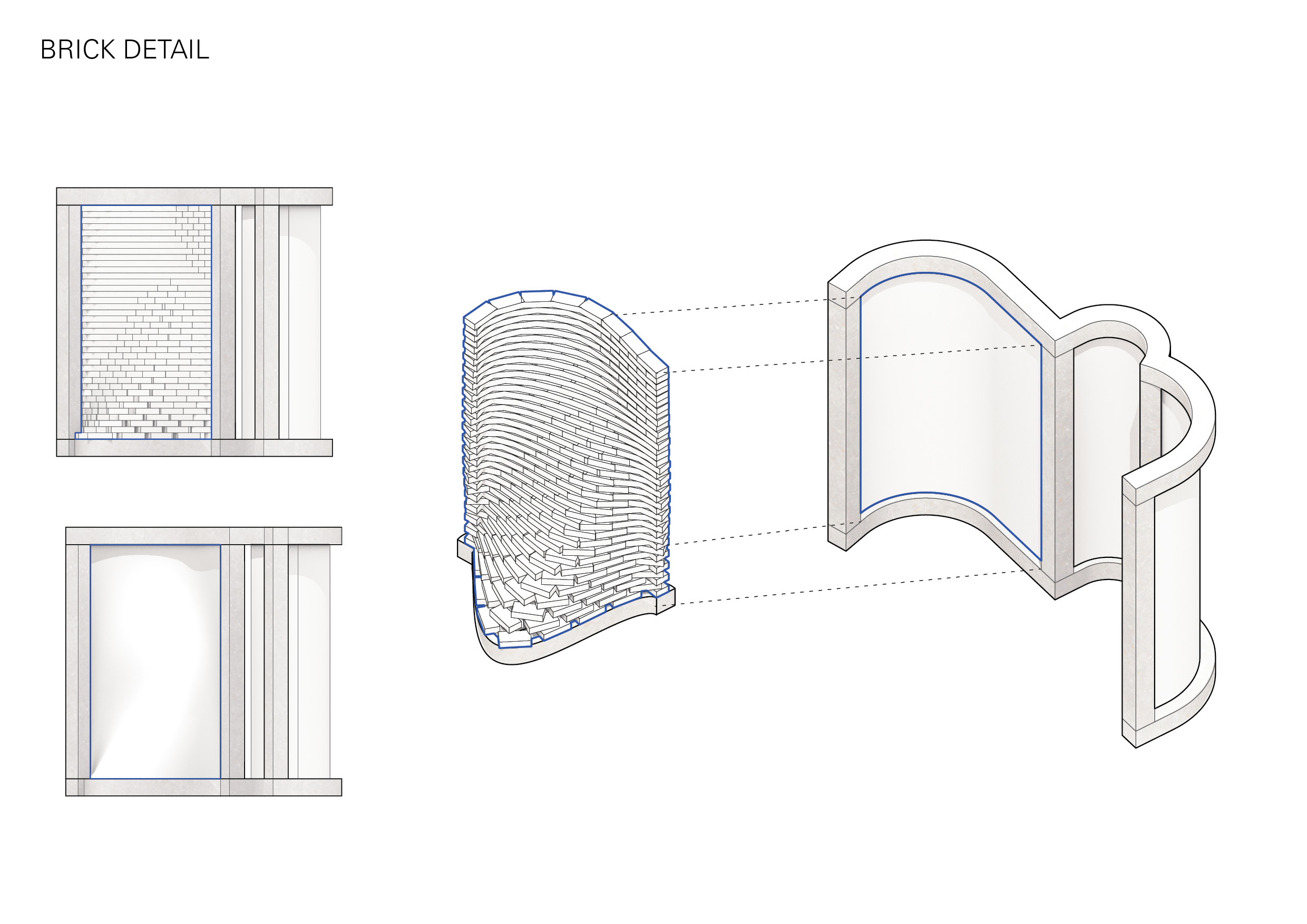 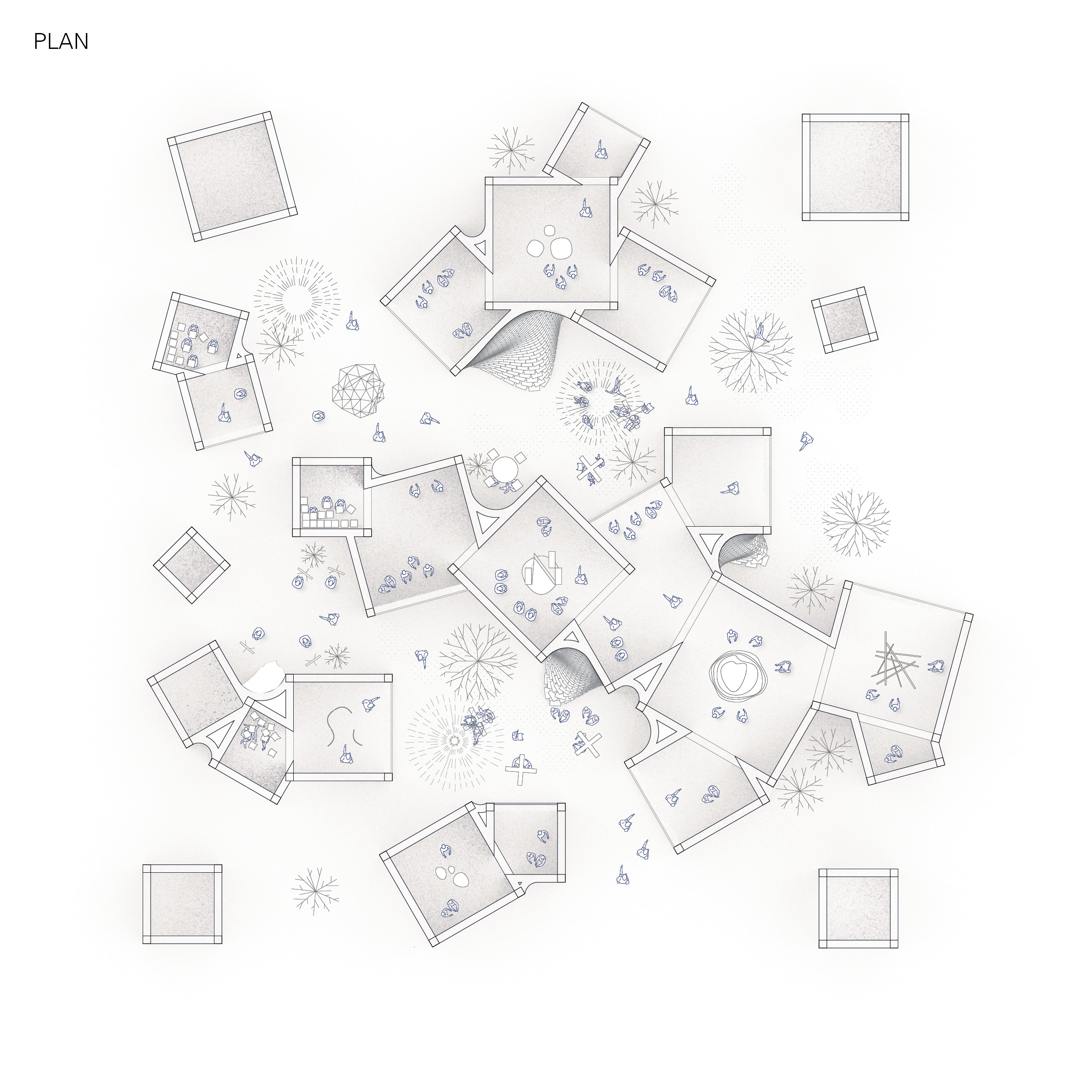 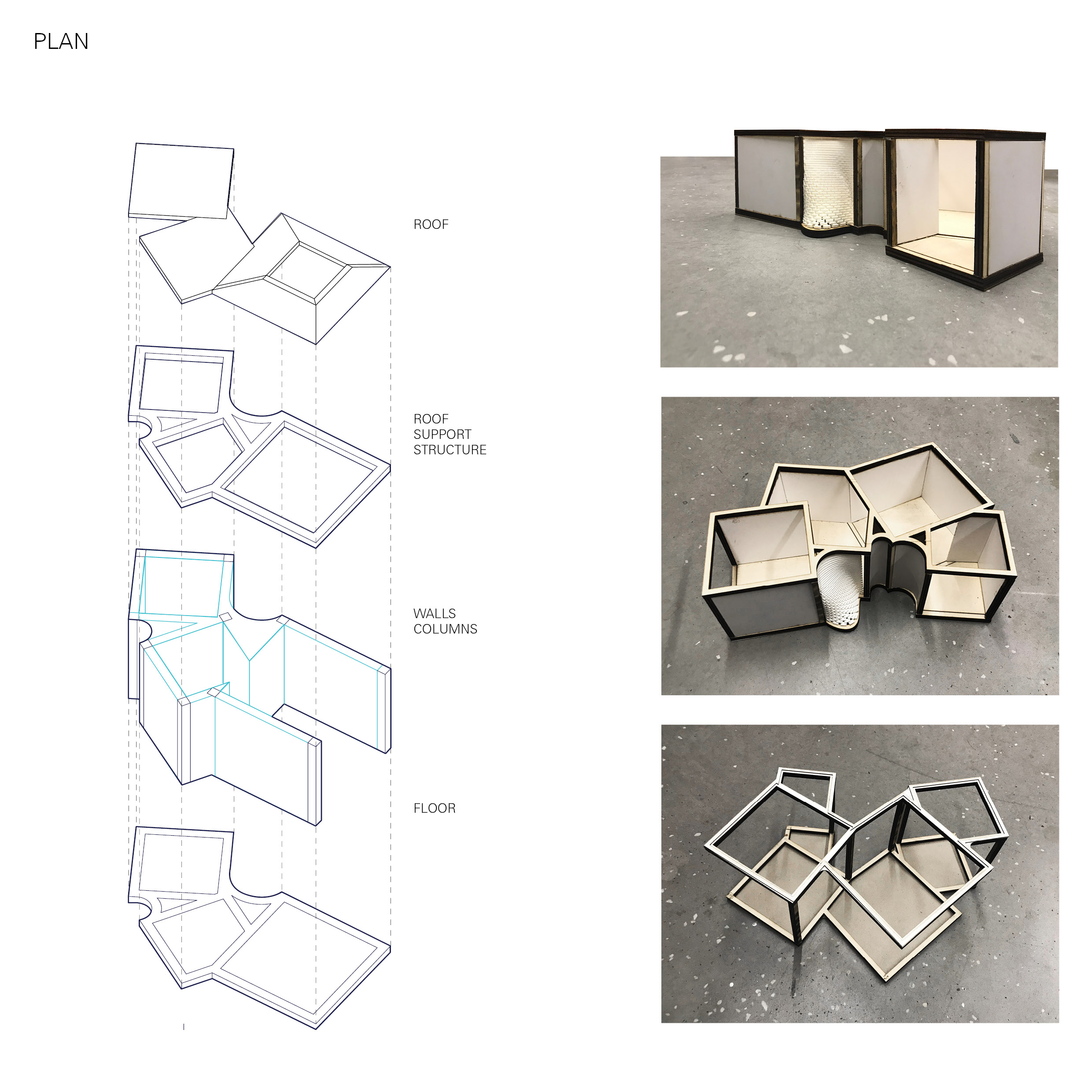 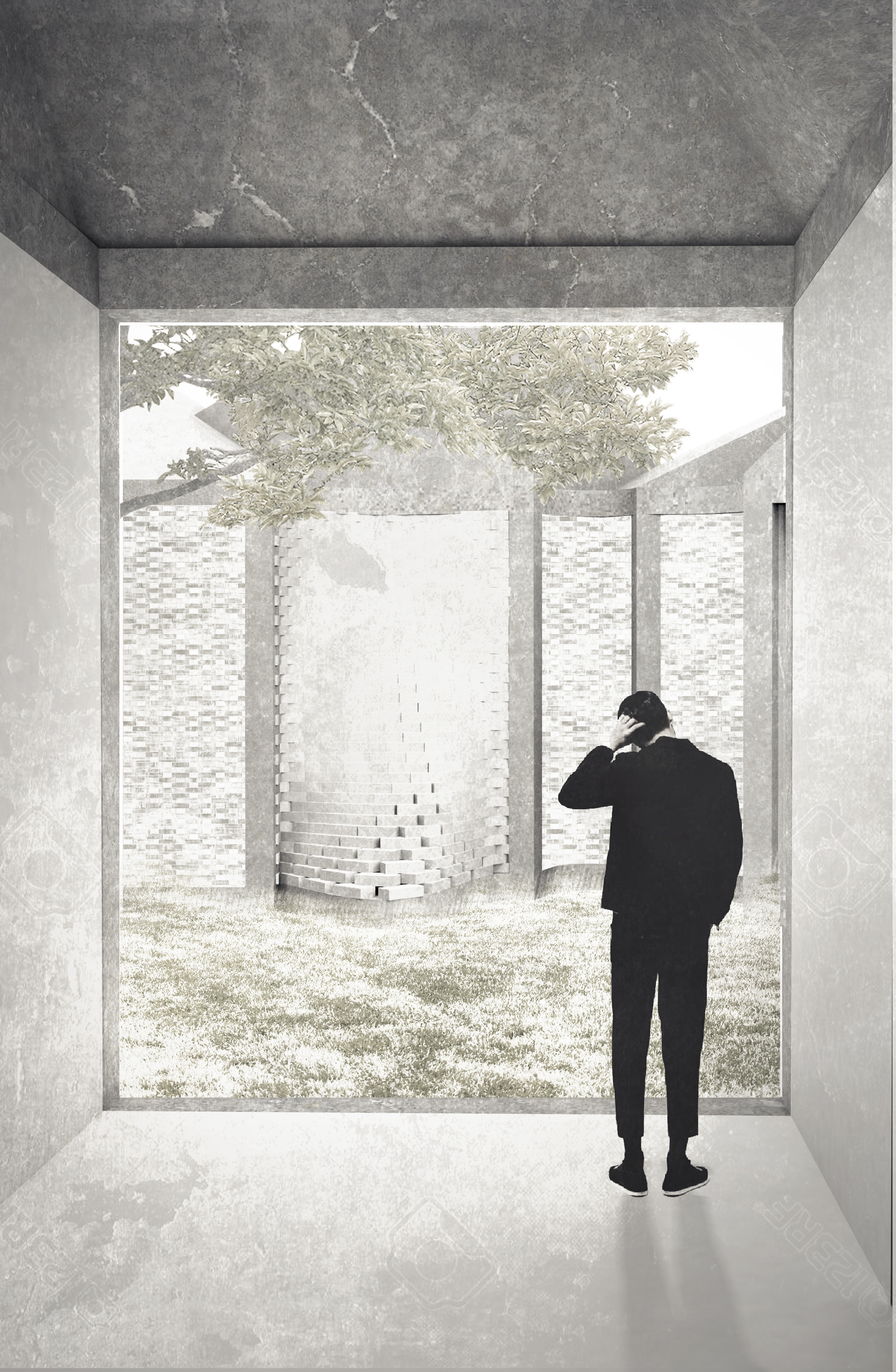 Since the last time, I decided to focus on solutions to problems pointed out on the last crit, which would be tight corners and misalignments of the “skeleton” structure. I started from building up a hypothetical scenario with four overlapping modules: 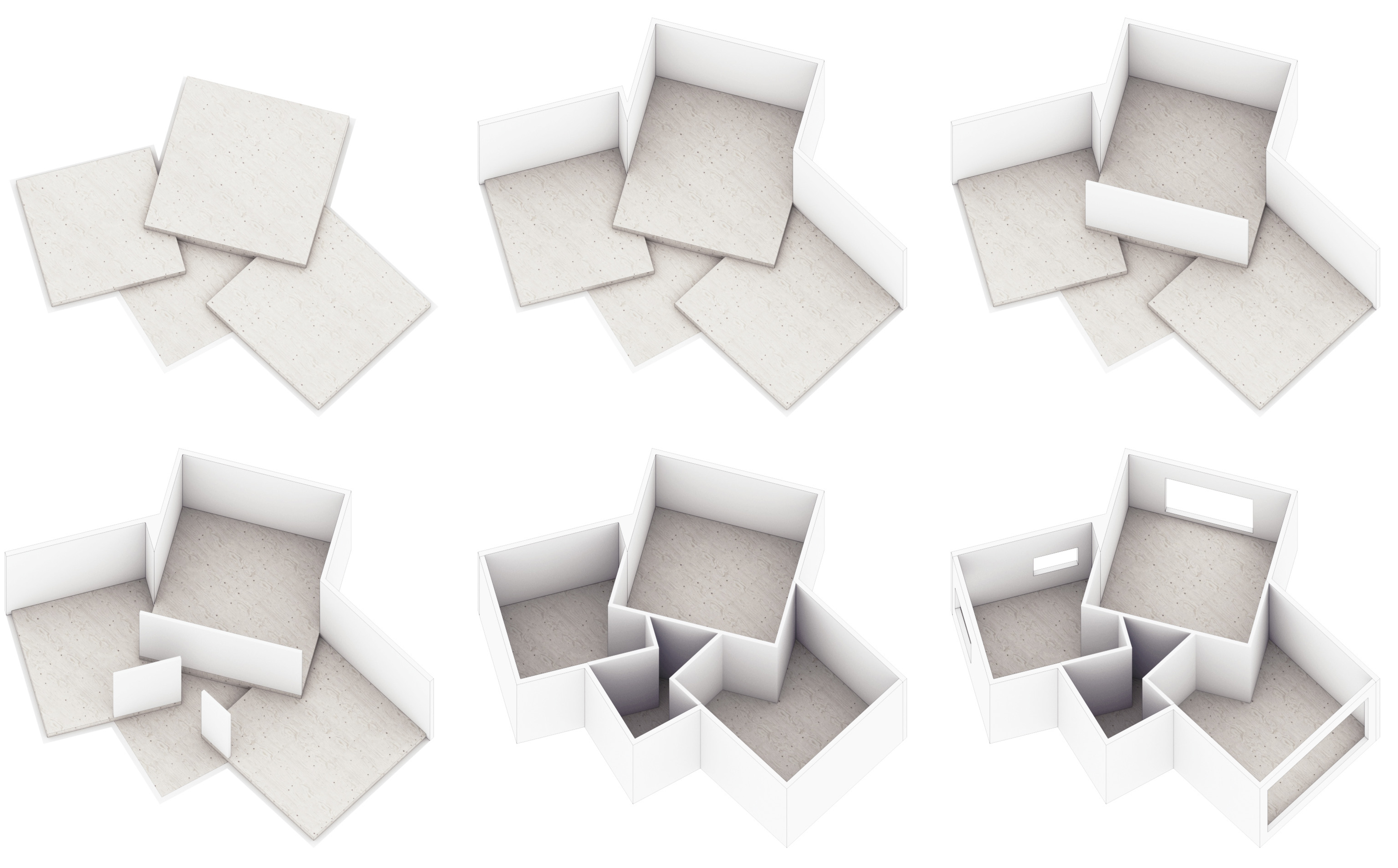 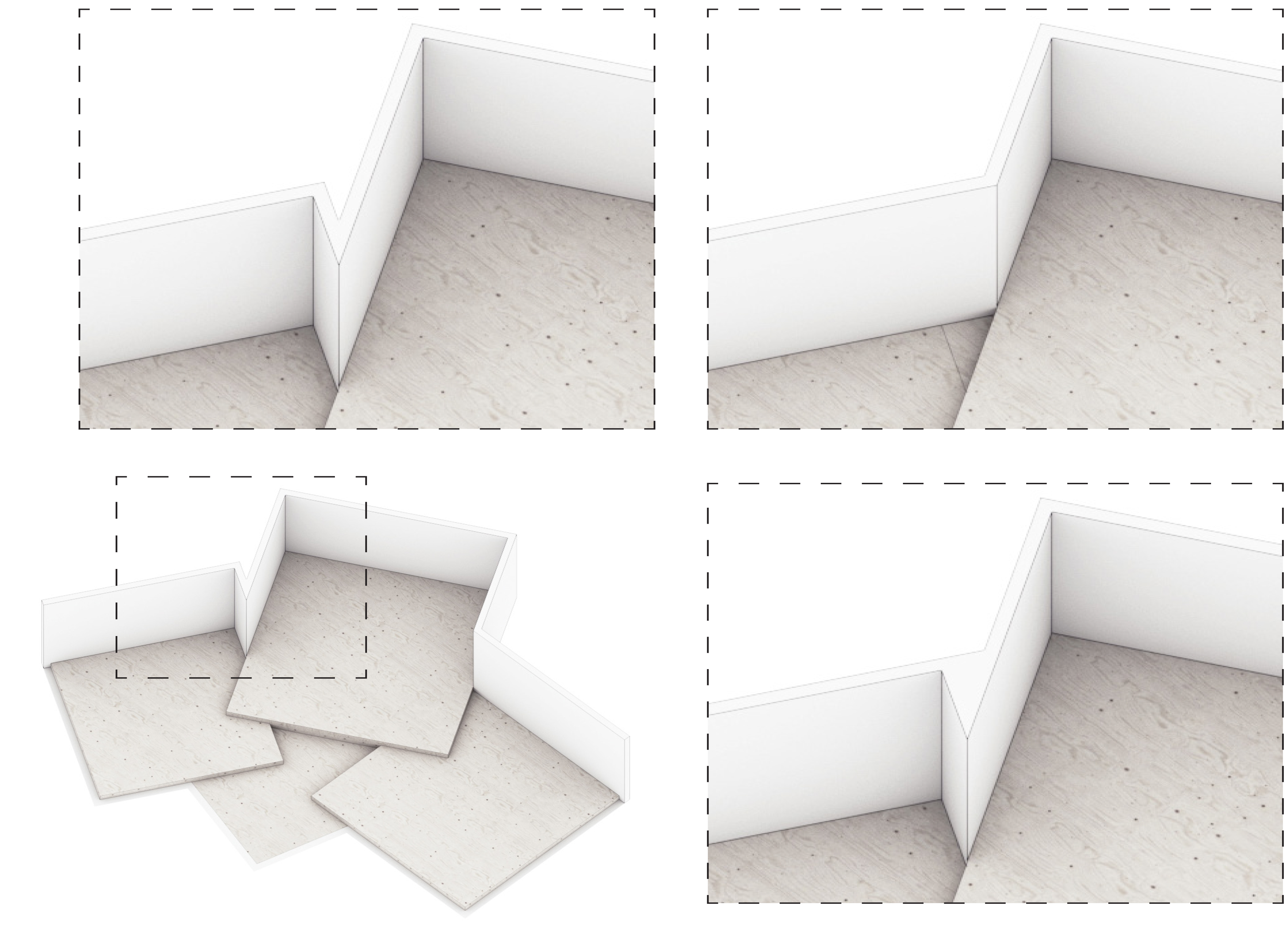 Introducing the new materiality to my configuration: 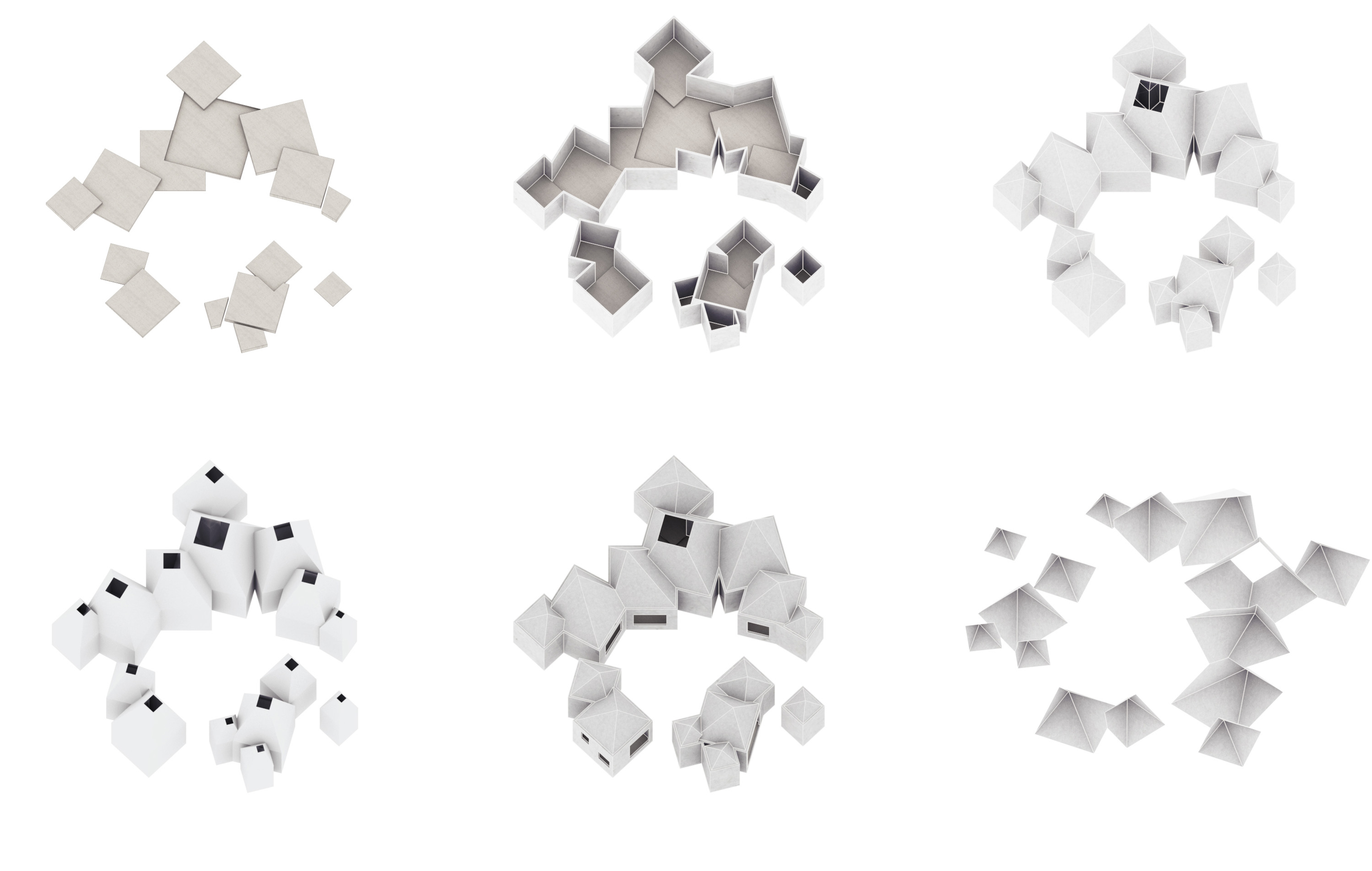 Zoom in on two tests:

Option with skylights, maximizing display area for the gallery. 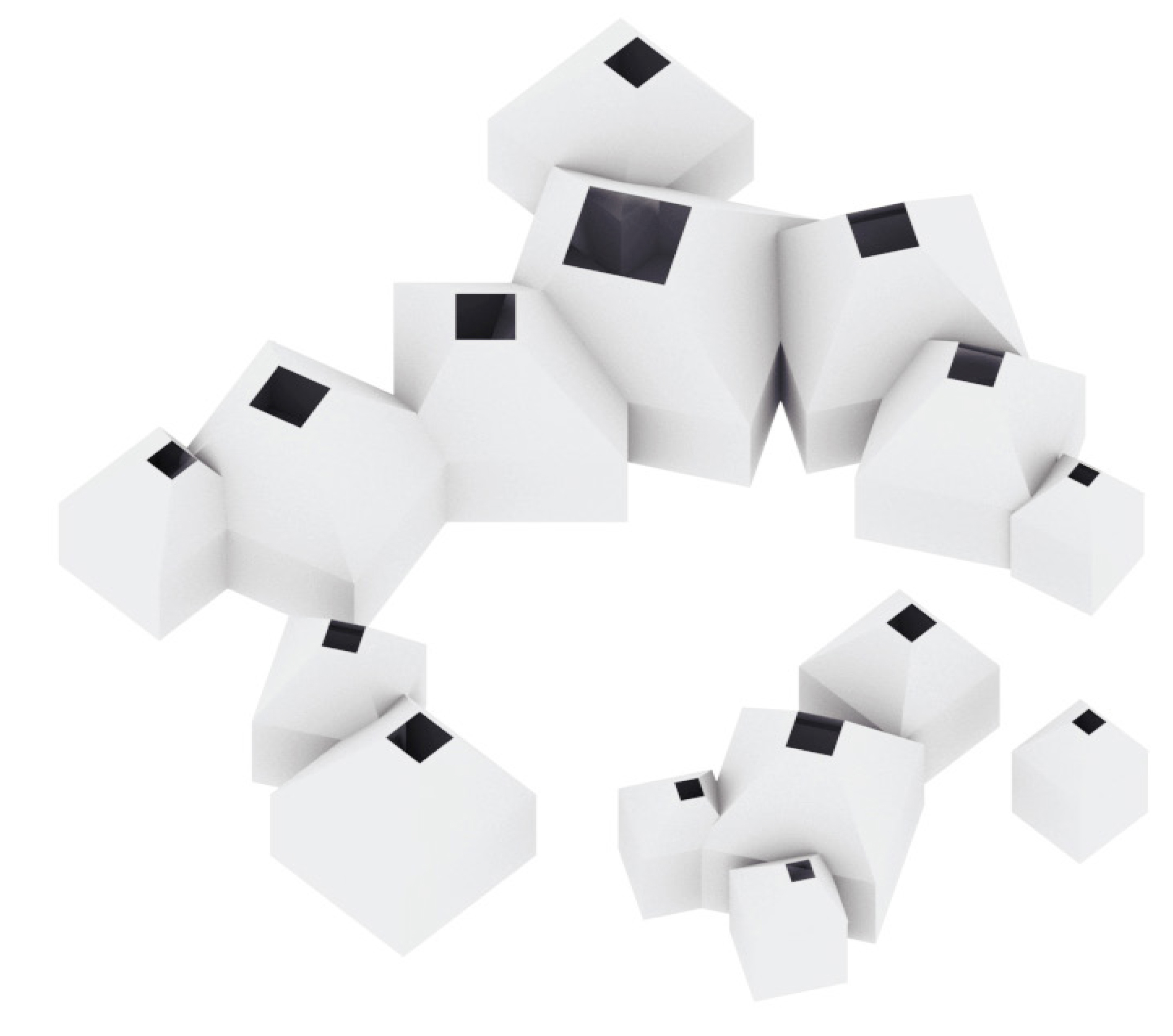 Option without skylights, allowing the visitors to look out towards the courtyard and the surrounding. 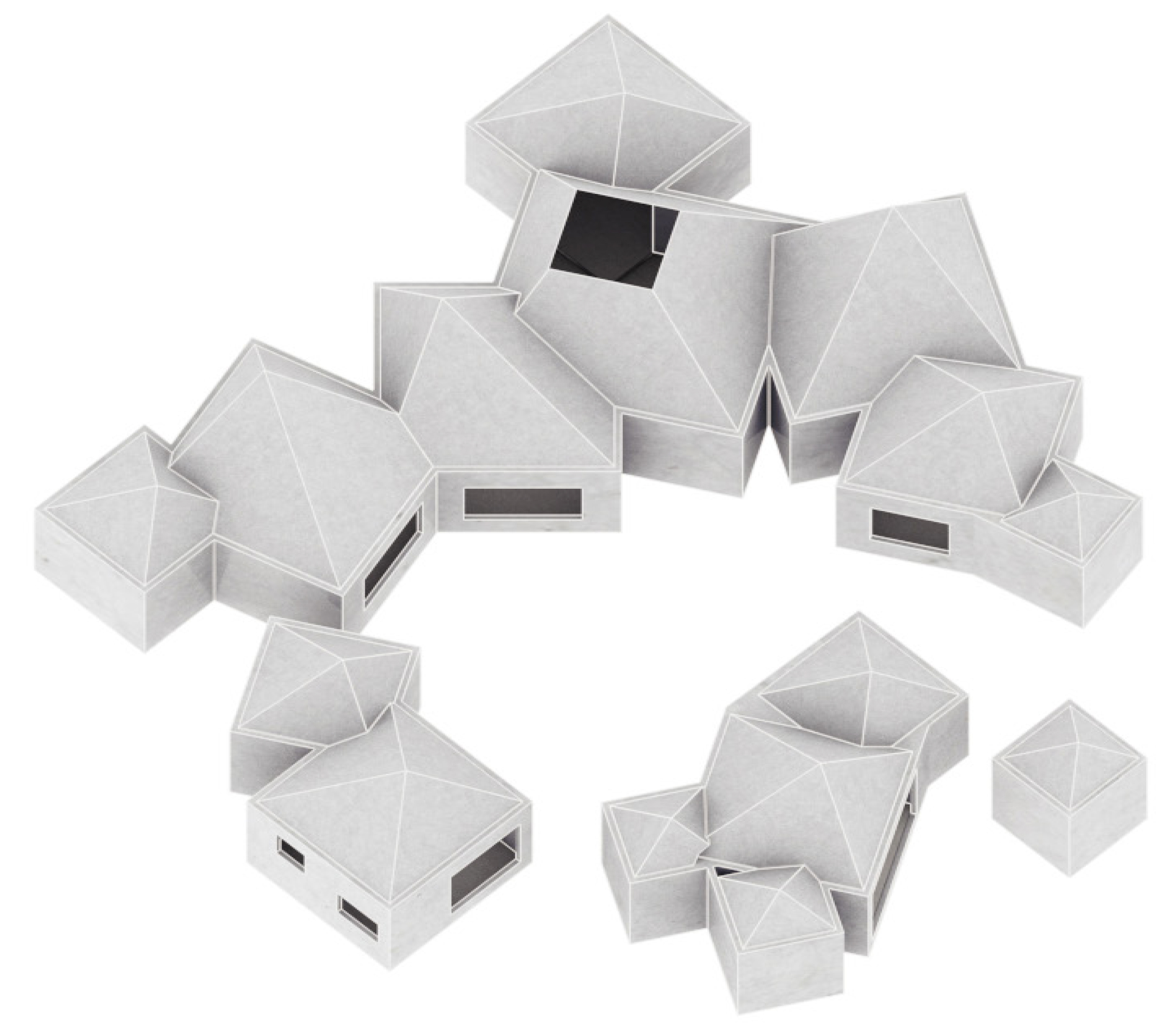 Roof intersections from below. 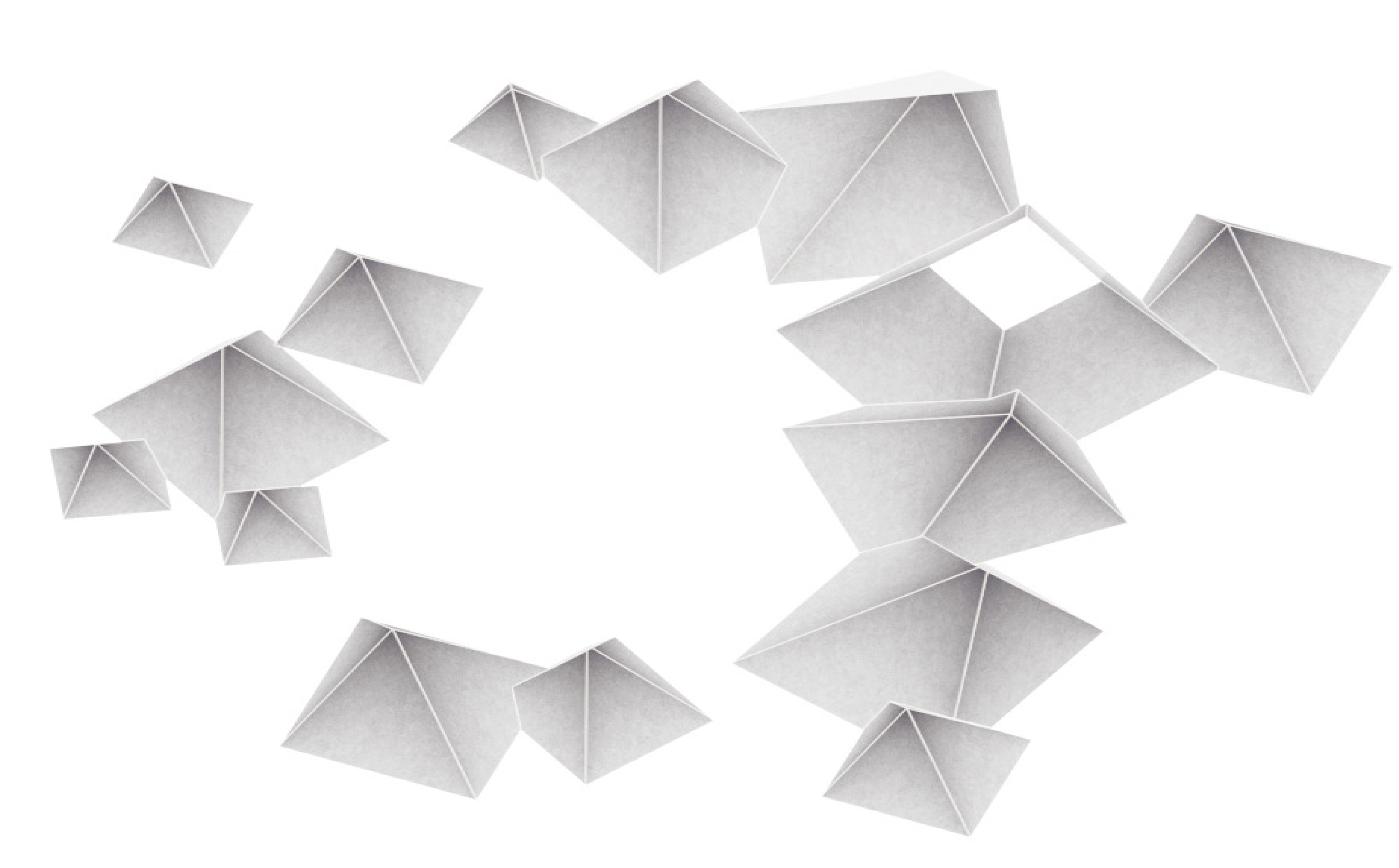 And finally the final section: 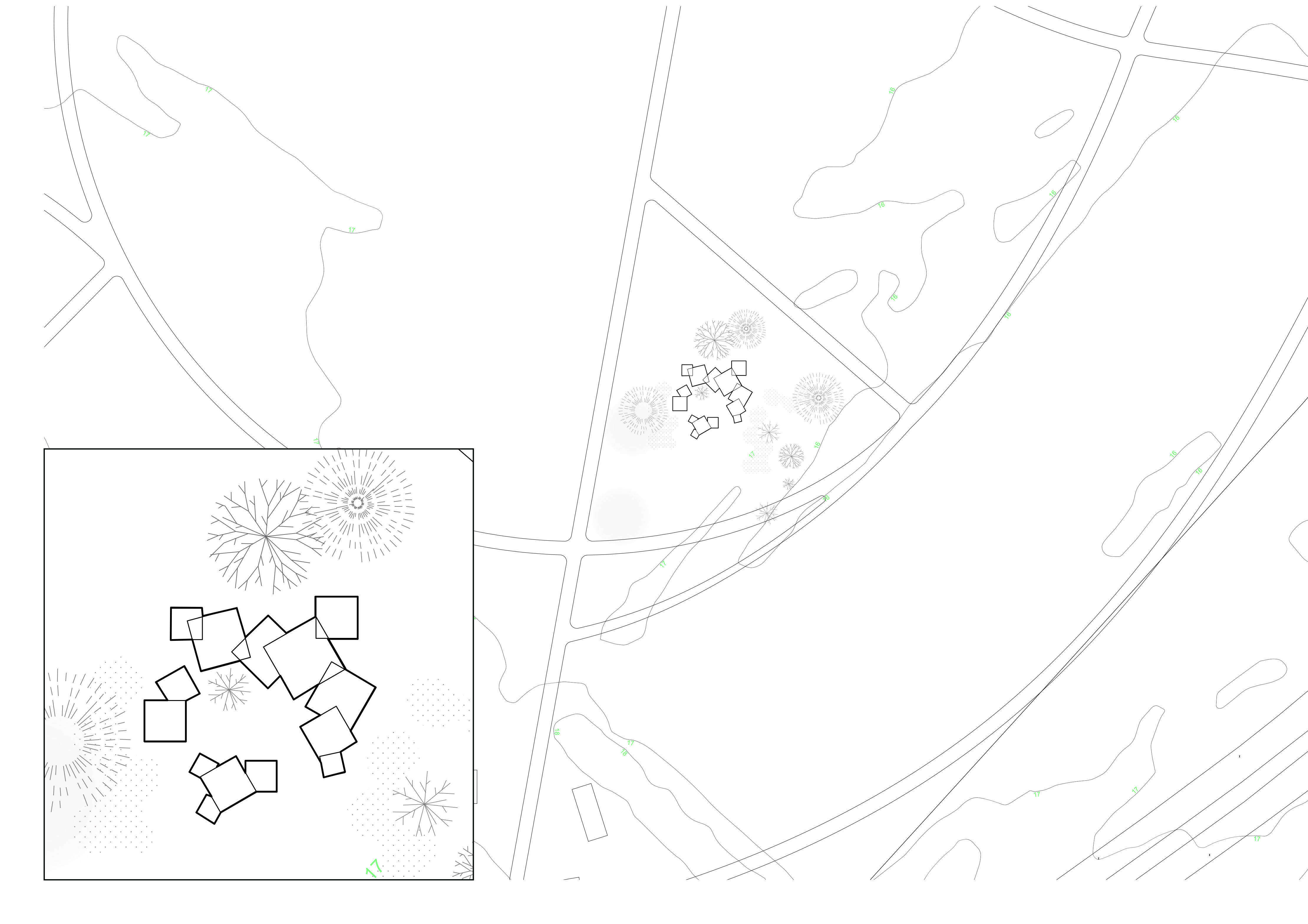 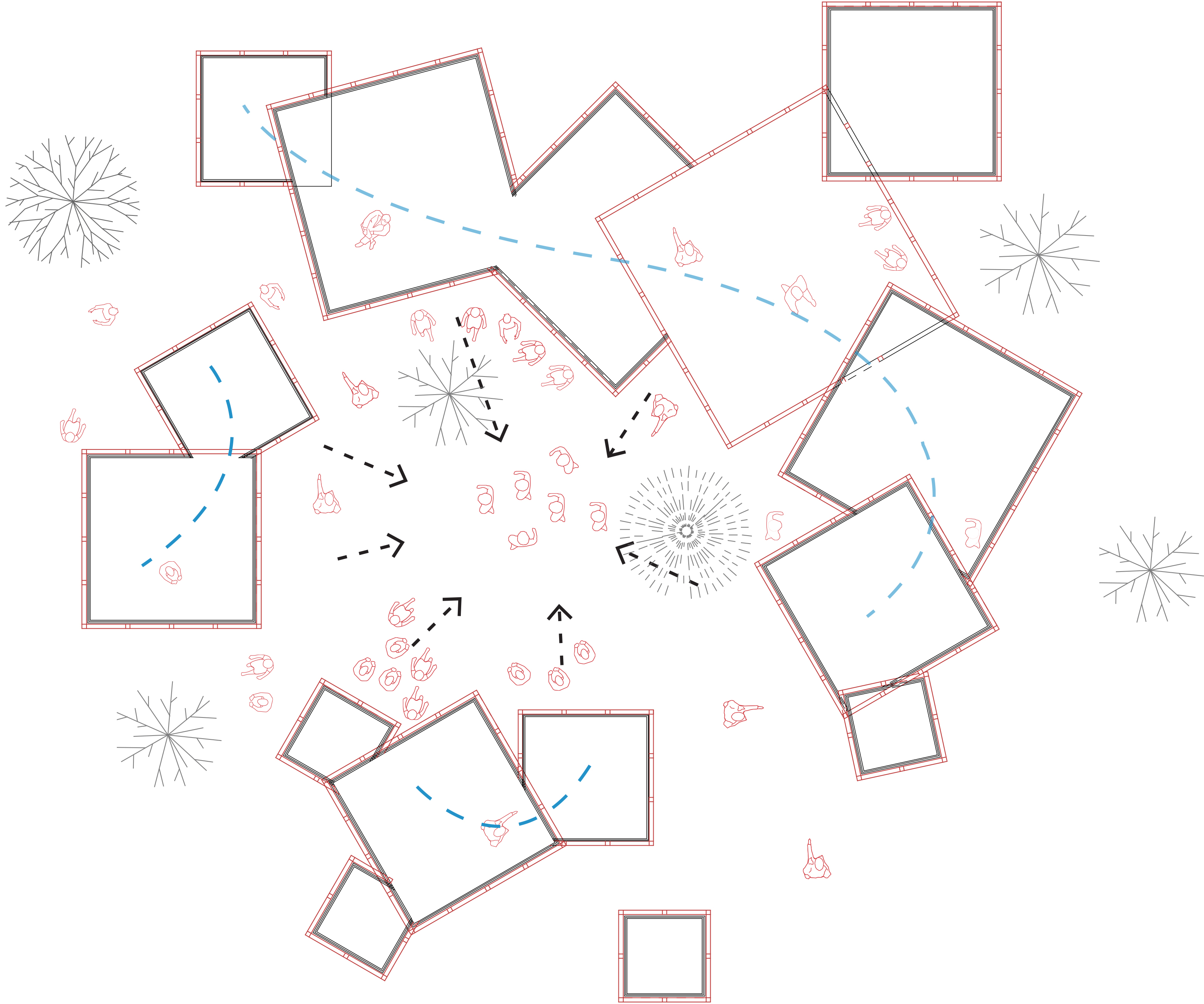 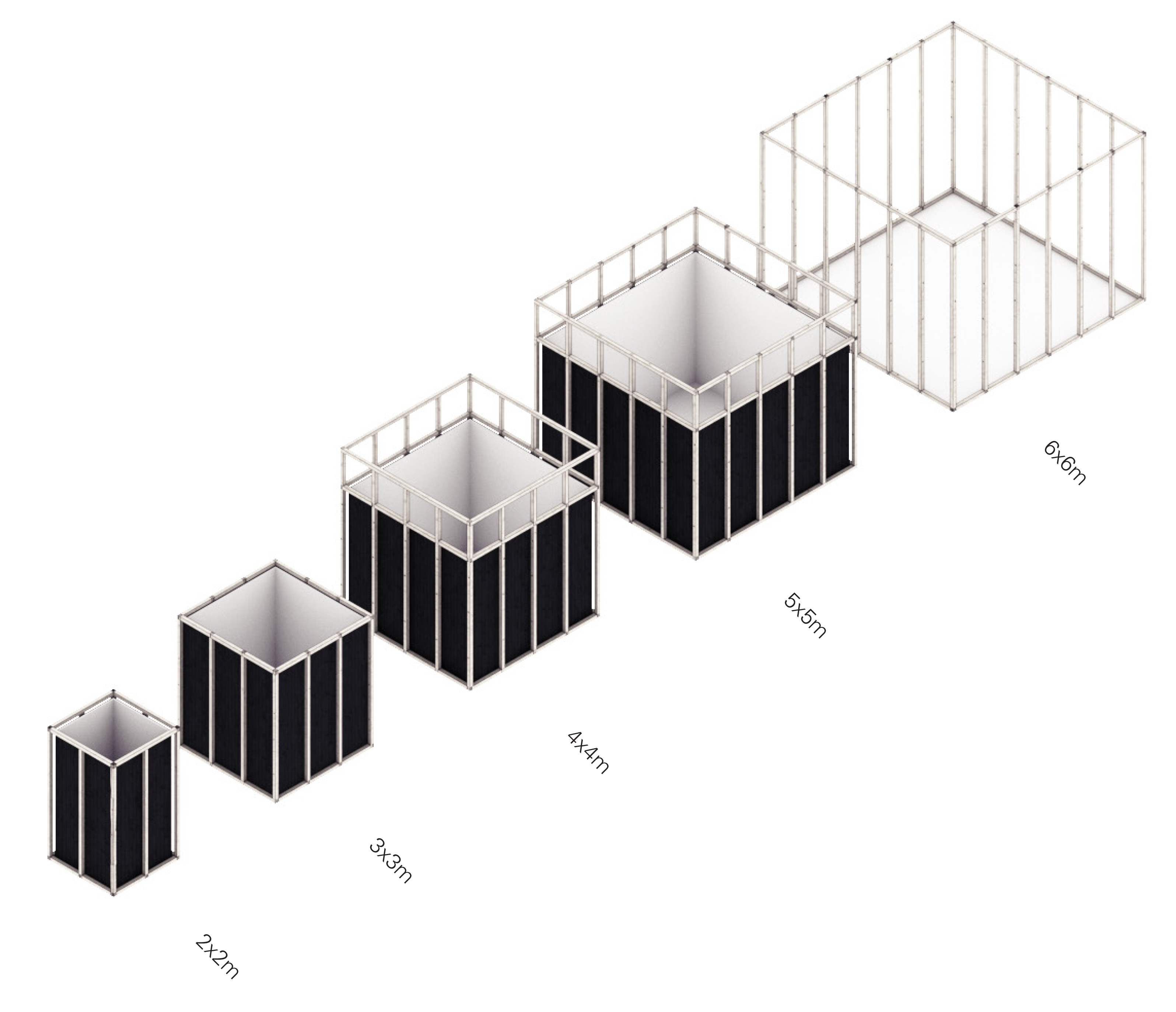 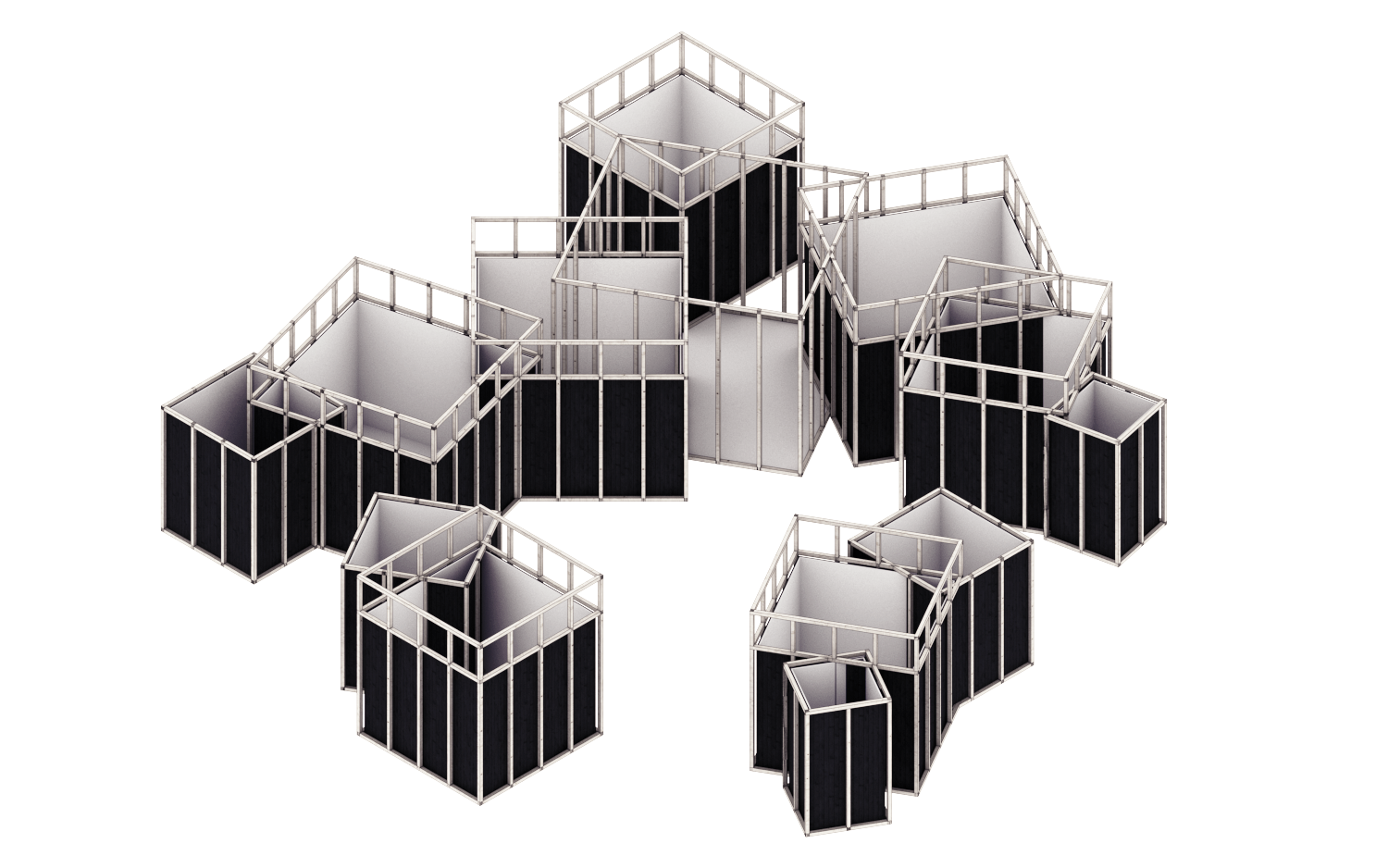 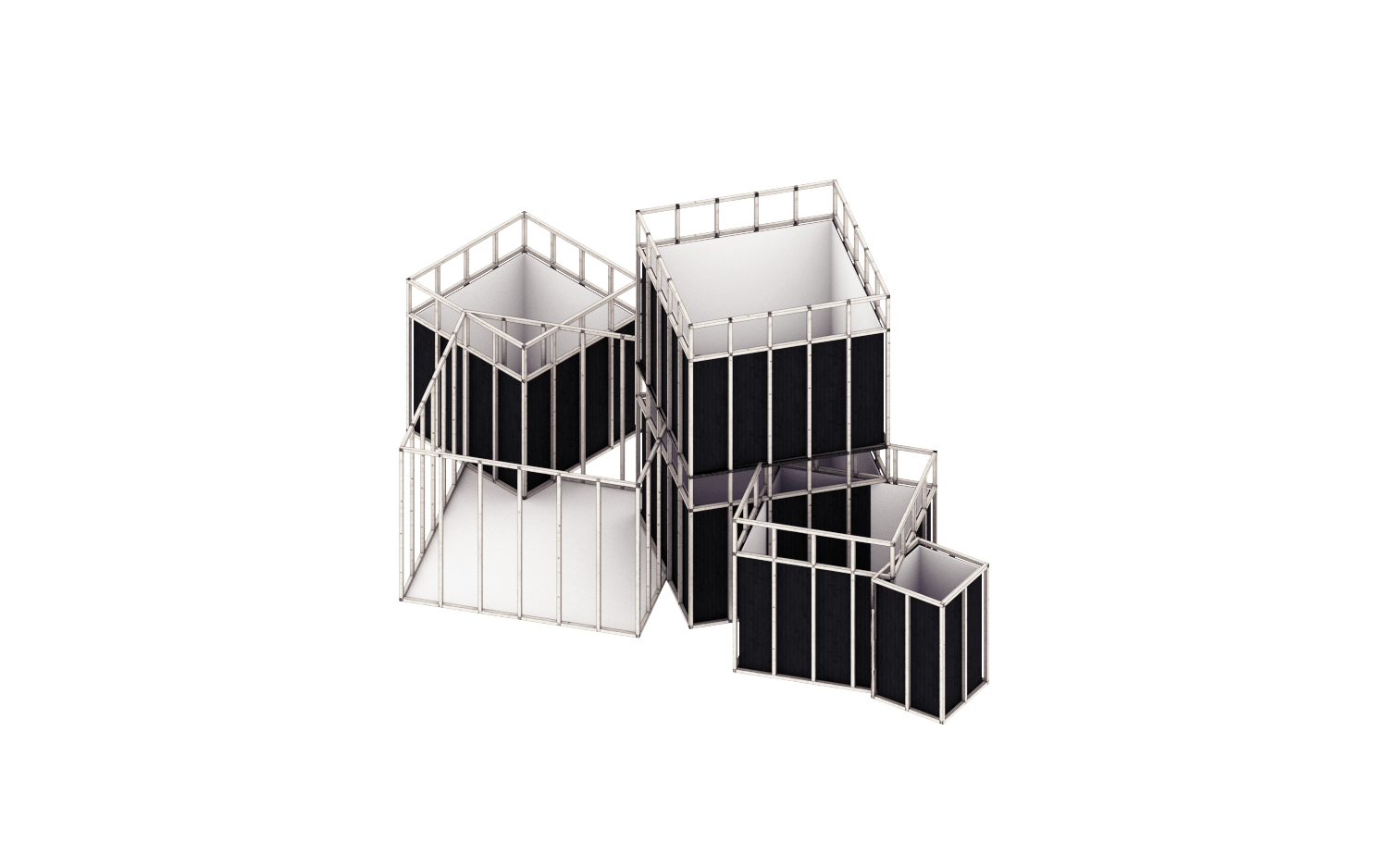 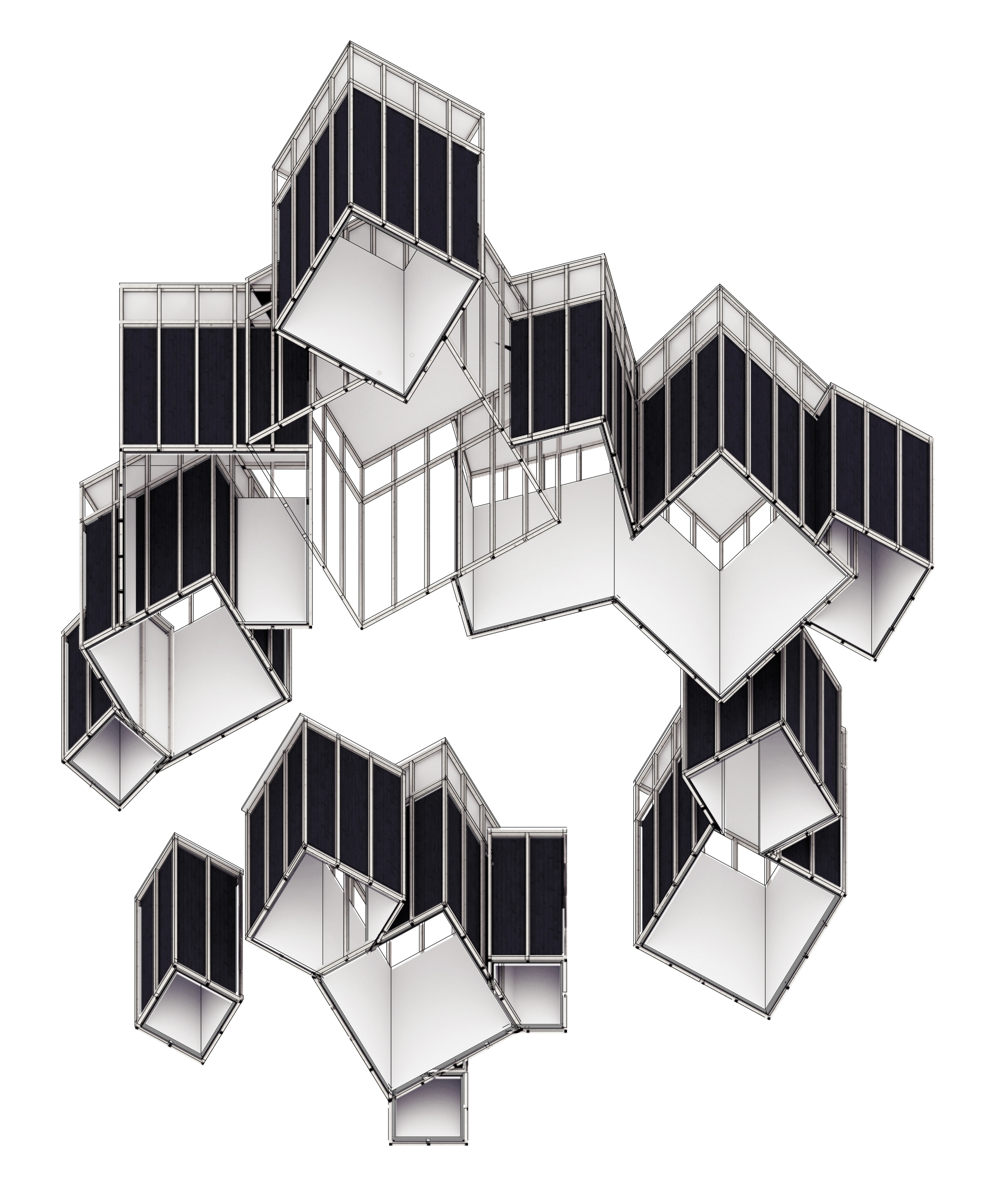 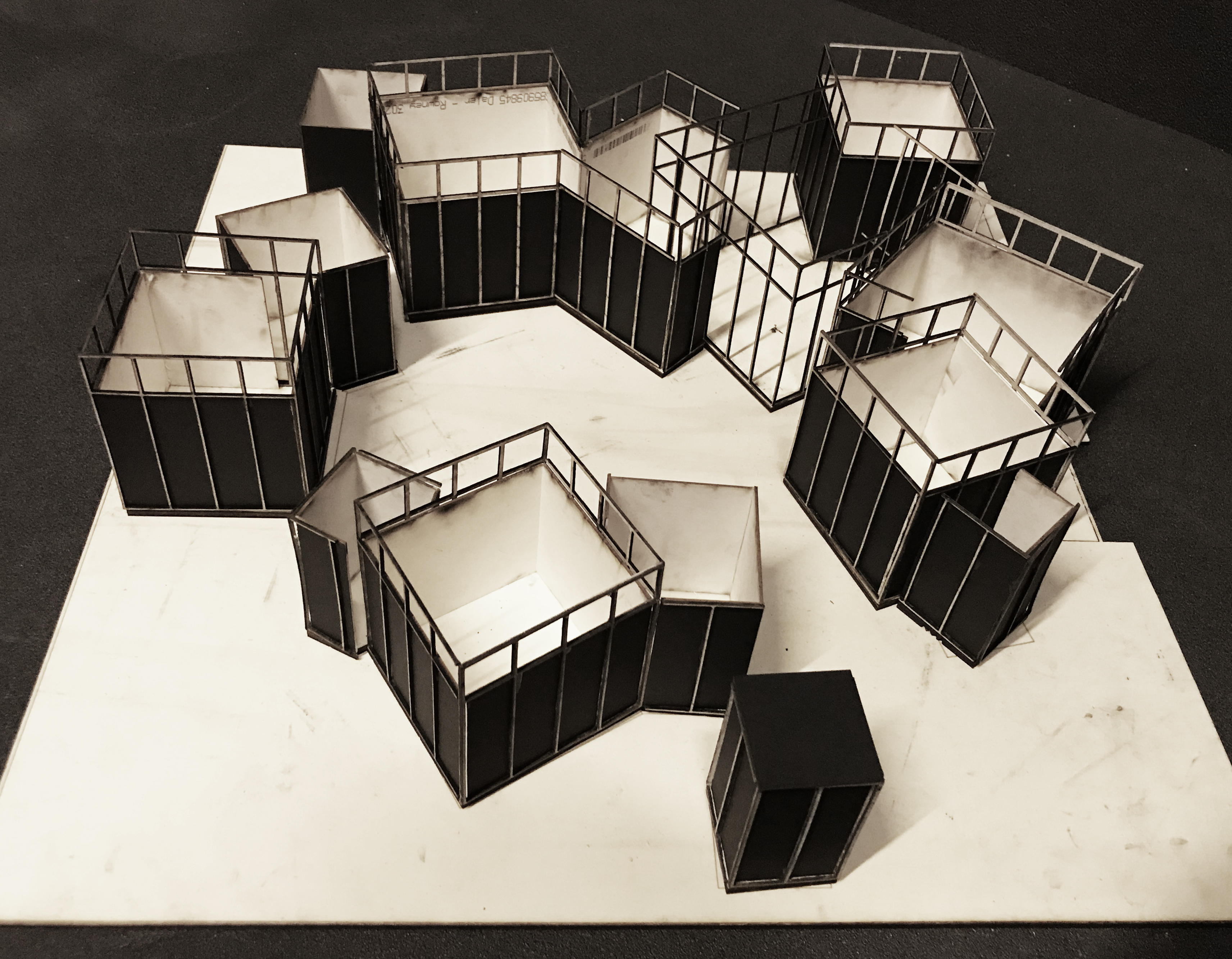 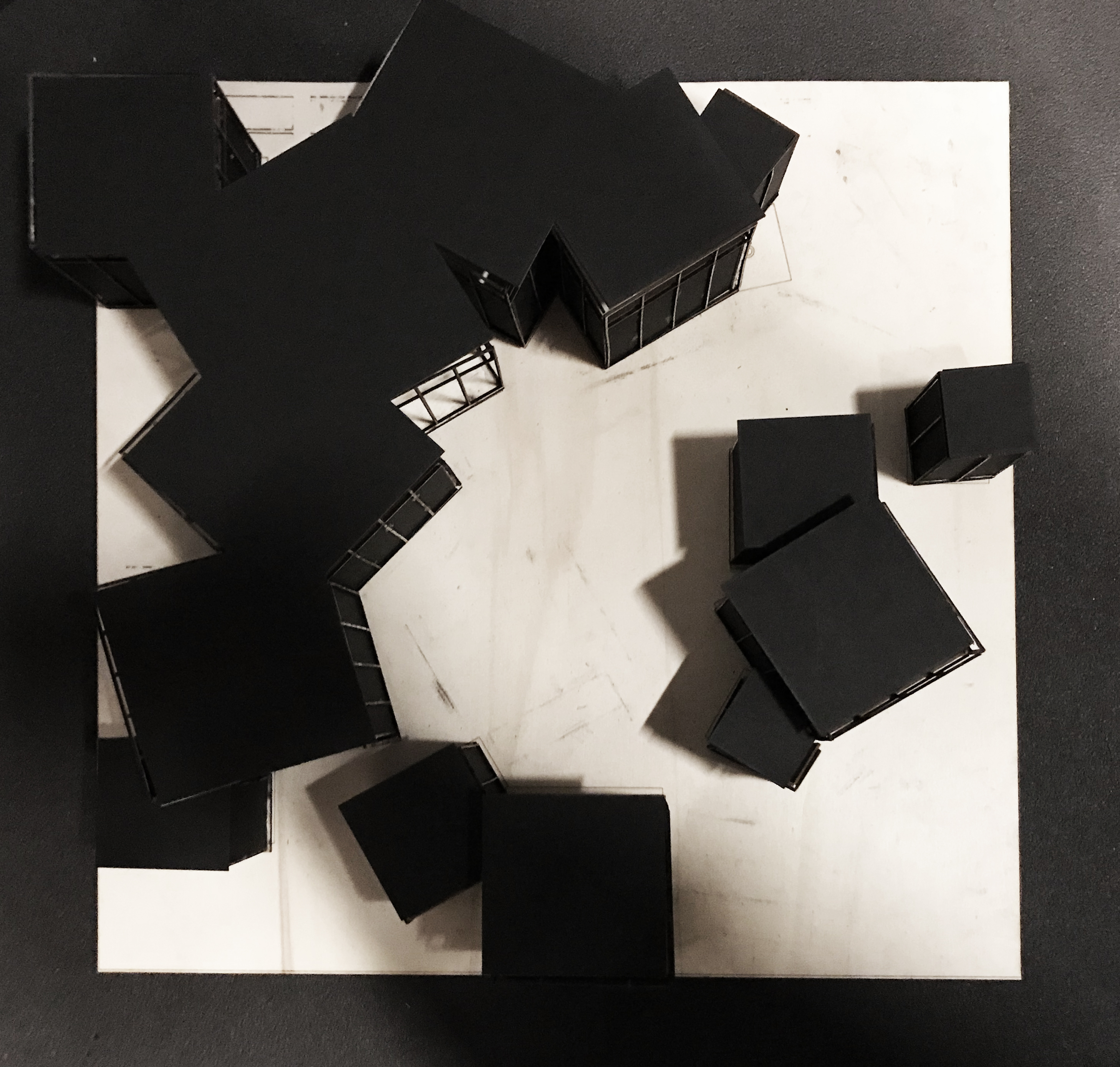 Looking further into adaptation I decided to focus on the code that uses points to impact the size of its surrounding elements. Having this script I changed the size of my element, allowed it to intersect and then randomly rotated with a step of 15 degrees. 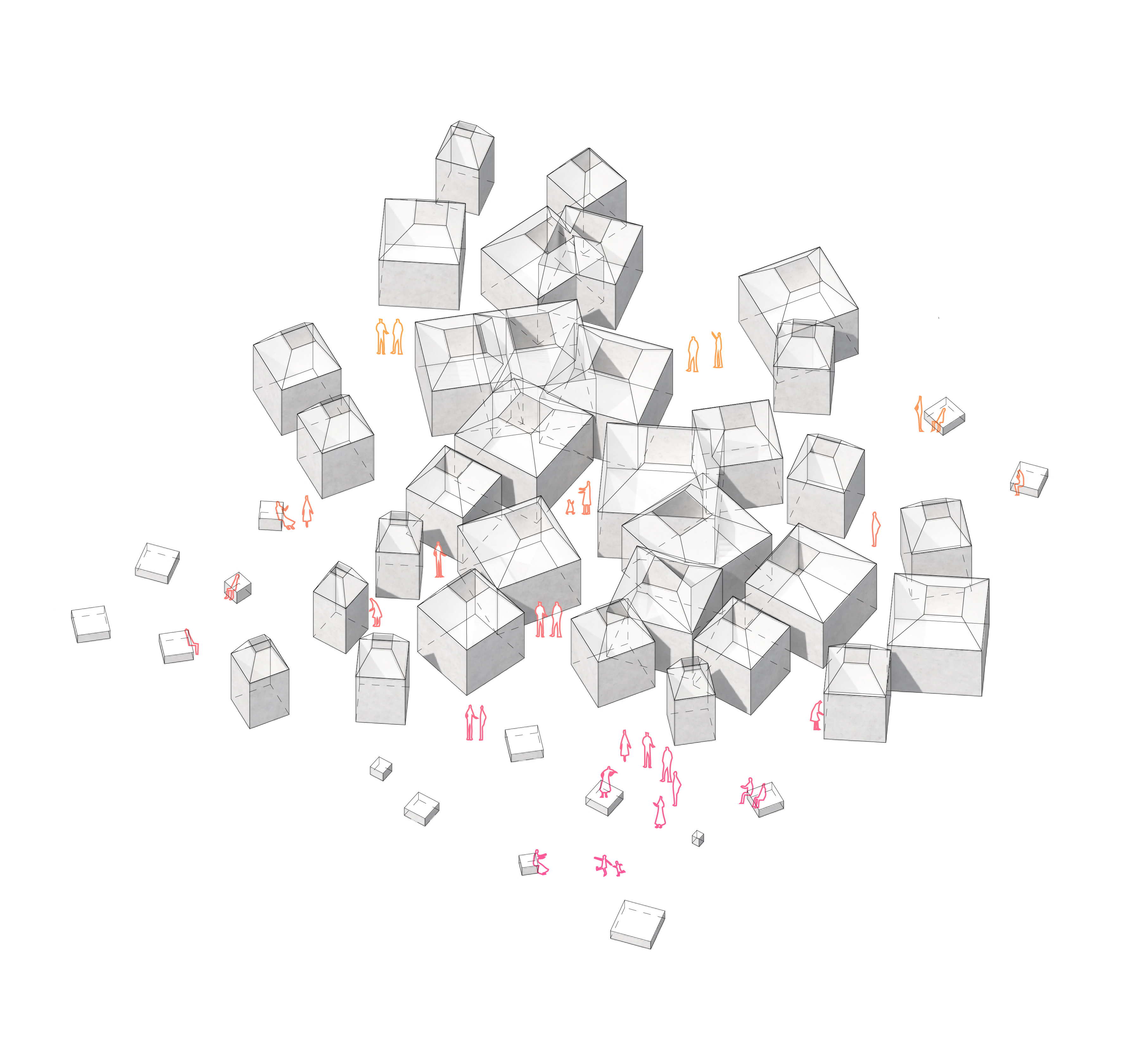 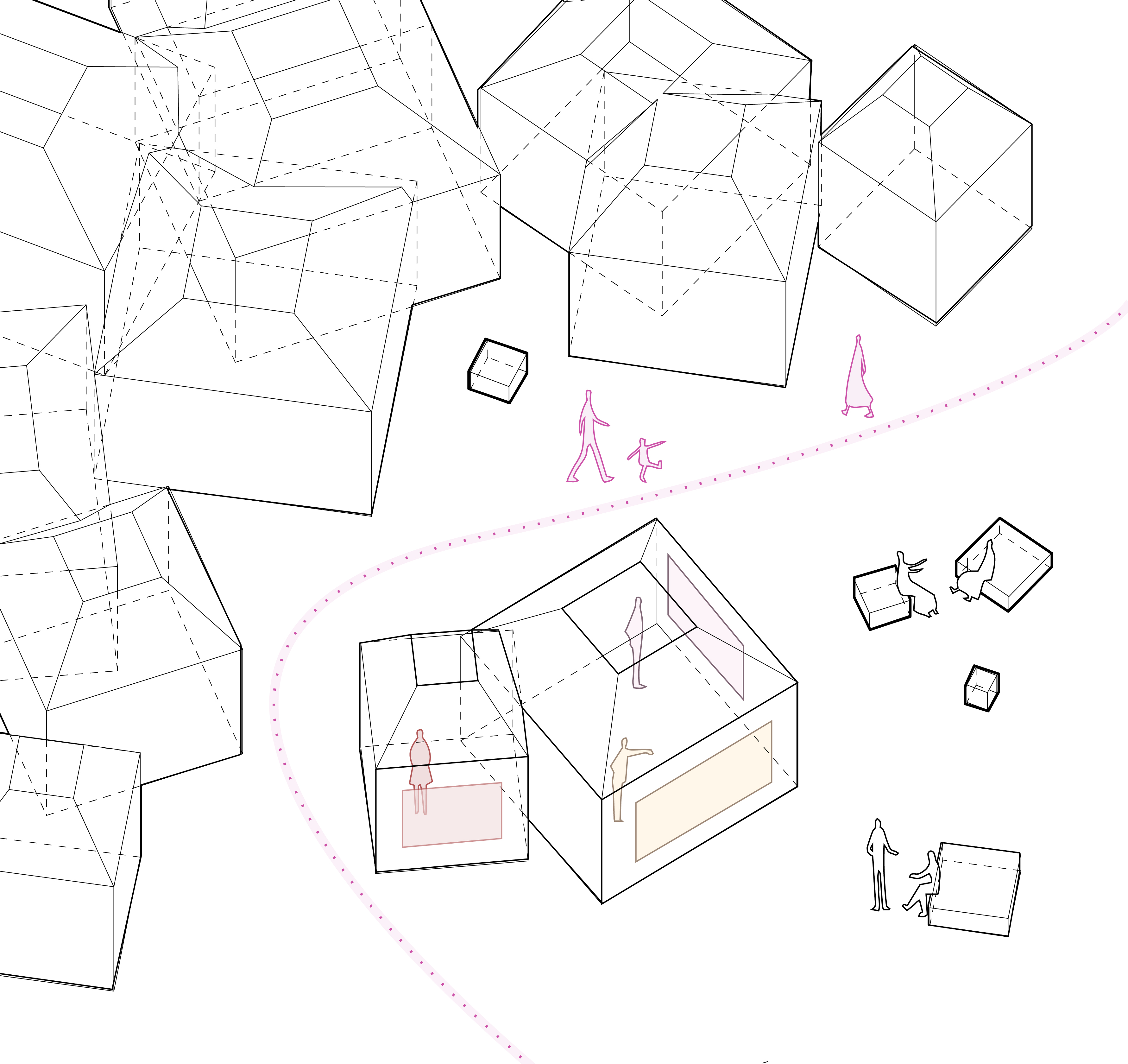 Test 1 – Extrusion of squares with width <2m. Each element is a separate pavilion with skylight.

Exploring possibilities of generated design I found especially interesting the idea of adaptation. Looking into precedents like this Aires Mateus house for the elderly below – one module is repeated in a way that the building as a whole follows topography. I decided to explore this topic further (although I didn’t really achieve what I was initially planning).

Exploration of simple composition based on the grid.

Adapting an existing cracking algorithm in order to get a more complex shape (initially the aim of this exercise was to crack the polygon in a way to create adaptable staircase).